The game page now has a new cover image to go with the release of 1.0.0! 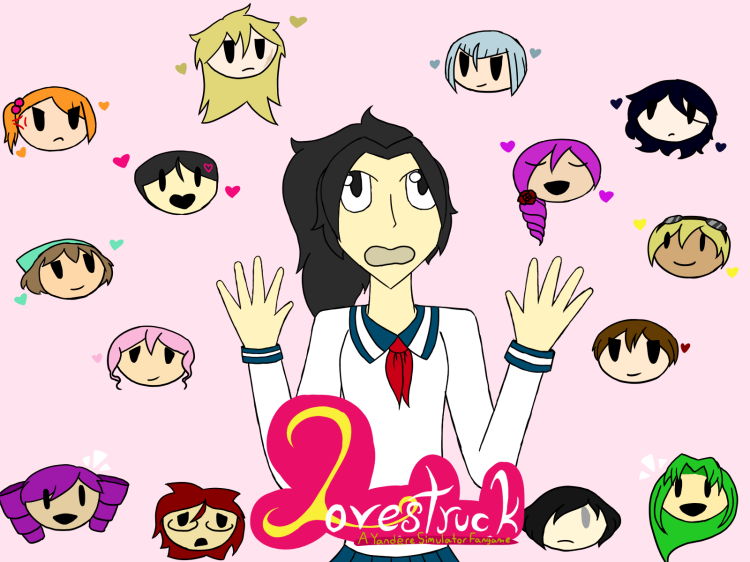 This piece took aaaaaaaaaages. (My hands hurt >m<) However, I thought it was necessary to make it very obvious that 1.0.0 is practically a new game, and get the interest of people who might have played 0.2.0 and thought 'oh, I've already played this' when looking through the site for new Yandere Simulator fangames, even though it's been updated. This way, people looking through the search will see something new, and want to check it out! It's called marketing, probably, and I'm not sure I'm doing it correctly. Oh well

When I release the next build, whenever that will be, this picture will be the new main menu image, replacing the stock photo with the envelopes! I'll try and do a new main menu image/cover image every major update, so you'll know at a glance at the project page if there's anything new worth checking out.

I'm aiming to release Day 2 as version 1.1.0. However, before (or likely after knowing me) I do that, there will likely be lots of 1.0.x builds to improve various spritesets and add new ones. Whether I end up collaborating with my friend on the art or not, I definitely still think there's plenty of room for improvement.. The highest priority right now is a new spriteset for Megamo, as his looks the dumbest, and then Hanako, who looks second dumbest. (Amao is a close third, but the correct general style and line weight make up for the noodle arms.) Osoro's sprites are great, imo, but they need to be completely redrawn anyways because they need to be sized up. In short, everyone except Ayano, Kokona, Osano (maaaybe), Oko, and Kizano (also a close maybe) will end up getting redrawn. In addition, extra characters such as the teacher and the student council all need a static sprite- one with only one face- so they look like they're characters that are part of the game and not distant offscreen voices. (The student council will probably get faces eventually, with Megamo's route, but that's ages away.) Expect these all to come randomly, unpredictably, and out-of-order.

thanks for looking at my nonsense ilyall

Get Lovestruck - A Yandere Simulator Fangame